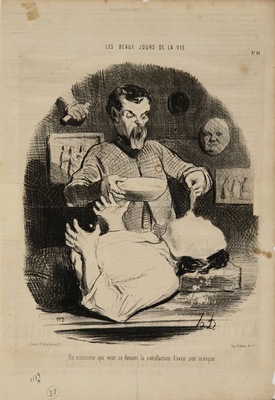 English: A gentleman who enjoys the satisfaction of having his mask taken.

Sculptors sometimes used plaster casts or “life-masks” of a person’s face as the basis for a portrait bust. From the application and drying of the plaster, to its skin-pulling removal, the process was incredibly uncomfortable. The subject of Daumier’s print seems likely to agree with Abraham Lincoln, who underwent the procedure in 1860—he found it “anything but agreeable.”