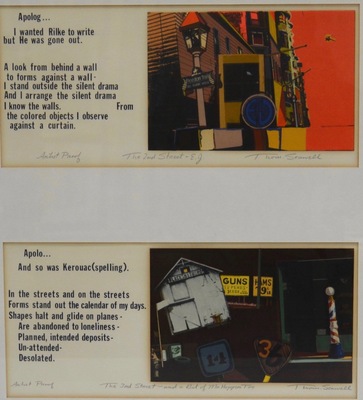 Text reads: "Apolog... I wanted Rilke to write but He was gone out. A look from behind a wall to forms against a wall- I stand outside the silent drama And I arrange the silent drama I know the walls. From the colored objects I observe against a curtain."

Text reads: "Apolo... And so was Kerouac(spelling) In the streets and on the streets Forms stand out the calendar of my days. Shapes halt and glide on planes- Are abandoned to loneliness- Planned, intended deposits- Un-attended- Desolated."