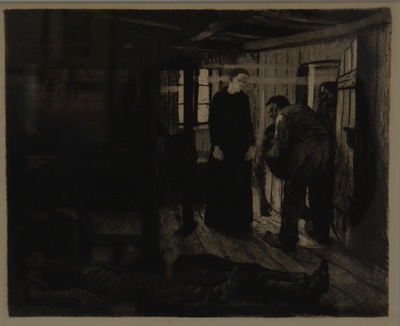 This is the final image in the Weavers’ Revolt series. Their uprising

having been crushed by the military, the defeated weavers bring

together the casualties, which are, tragically, the only fruit of their

rebellion. In retelling events that were already then a half-century old,

Kollwitz meant to bring attention to the continued suffering of workers

as the 19th century drew to a close. She would continue to protest

social injustice throughout her career—because of her opposition to the

Nazi Party in the 1930s, she was banned from exhibiting in Germany.