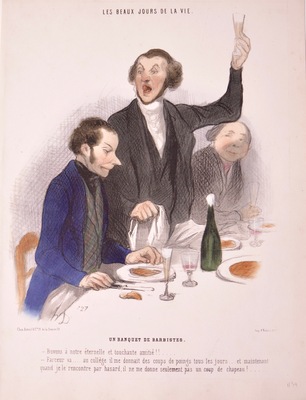 Purchased with f funds from the Myers Foundations.

- Let’s drink to our eternal and moving friendship.

- Get lost you joker!..... at college he hit me with his fists every day.... and now, when I meet him by accident on the street, he doesn’t even lift his hat.

Just like today, alumni of French schools enjoyed reconnecting at social events. As Daumier notes in this image, sometimes school days seem better in hindsight than they were in real life.