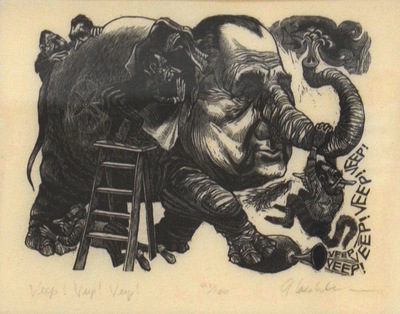 The elephant and donkey as political party mascots has roots in the 19thcentury. During the 1828 Presidential campaign, opponents of Democratic candidate Andrew Jackson called him the not-so-nice term for a male donkey or foolish person. Jackson embraced the insult and in the 1870s Thomas Nast, a prominent political cartoonist, made the donkey popular as the symbol for the Democratic Party. In 1874 Nast published another cartoon, which portrayed special interest groups as various animals. “The Republican Vote”, was written on the side of an elephant in the work. Although the elephant had been associated with the Republican Party previously, that particular depiction led to other cartoonists using it in their works and it was eventually adopted by the Party.

In this work, Gloeckler satirizes then Vice President of the United States, Spiro Agnew. President Nixon takes on the form of the elephant while Agnew is featured many times throughout the image in visual puns such as, “eating an elephant one bite at a time”, reflecting political happenings of the era in which the work was made.