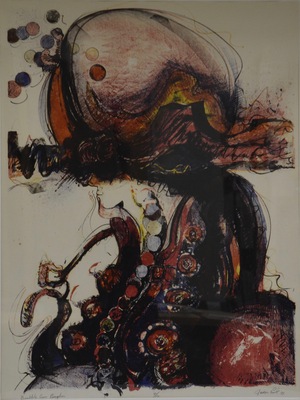 James Pink creates work that is narrative in style, allowing the viewer to create or interpret the story being told through his art. Mysterious and graceful, the octopus is one of few members of the animal kingdom that can change its skin color and most release ink as a defense mechanism, creating a seemingly magical opportunity to escape potential harm. Throughout history the octopus has taken on negative connotations in visual art, inspiring mythical creatures and folklore of giant octopuses overcoming ships at sea. Pink’s abstracted creation is much less dramatic, focusing instead on the colors, shapes, and motions of the animal.