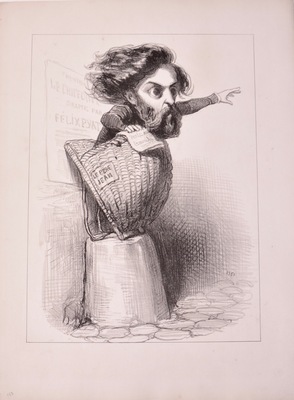 When the lithograph appeared in the Parisian newspaper Le Charivari, it had a French caption added that translates into English as follows:

Felix Pyat was a writer and active socialist politician who strongly advocated “the right to work” (which had a different political meaning than it does in the United States today). After the Revolution of 1848, which overthrew Louis Philippe, Pyat was a member of the Constituent Assembly, where he was aligned with the radical Montagnard faction.