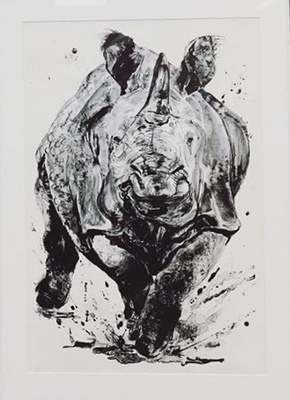 The rhinoceros’ earliest appearance in art includes Paleolithic cave paintings. Perhaps the most famous work of a rhino is the 1515 woodcut print by German artist Albrecht Dürer. Often depicted as symbols of strength and power, Caroline Thorington’s Rhino is no exception. Unfortunately the rhinoceros in its natural habitat is a target of poachers. With the horn of the rhino bringing substantial funds on the black market, some species of the animal are nearly extinct and less than 50,000 total rhinos exist in the world today.

Thorington received her Master of Fine Arts degree from George Washington University in 1975. She taught printmaking and drawing at Montgomery College for 25 years. Known for her zoological subjects, she creates imagery that in turn might promote awareness of the animal’s plight for survival.