Love Letter To A University 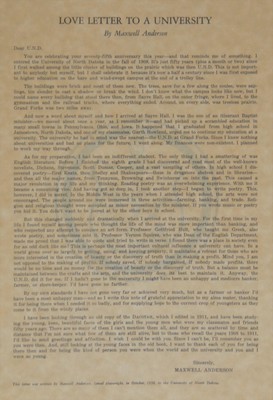 James Maxwell Anderson was an American playwright, author, and journalist. He was born in 1888 in Atlantic, Pennsylvania. His family frequently moved around, but they eventually settling in Jamestown, ND, where in 1908 Anderson graduated high school. He received his BA in Literature from the University of North Dakota in 1911, and his MA in English Literature from Stanford University in 1914 . Anderson later received an honorary doctorate in Literature from Columbia University, as well as in Humanities from the University of North Dakota. Over the span of his career, he worked various teaching positions and as a journalist, and often times was fired for voicing controversial opinions. Anderson went on to write several successful plays and dramas, and received the Pulitzer Prize for Drama in 1933. Sadly, in 1959, he passed away after a stroke.

LOVE LETTER TO A UNIVERSITY

You are celebrating your seventy-fifth anniversary this year-and that reminds me of something. I entered the University of North Dakota in the fall of 1908. It’s just fifty years (plus a month or two) since I first walked among the little cluster of buildings on the prairie which was then U.N.D. This is not important to anybody but myself, but I shall celebrate it because it’s now half a century since I was first exposed to higher education on the bare and wind-swept campus at the end of a trolley line.

The buildings were brick and most of them new. The trees, save for a few along the coulee, were saplings, too slender to cast a shadow or break the wind. I don’t know what the campus looks like now, but I could name every building that stood there then, from Sayre Hall, on the outer fringe, where I lived, to the gymnasium and the railroad tracks, where everything ended. Around, on every side, was treeless prairie. Grand Forks was two miles away.

And now a word about myself and how I arrived at Sayre Hall. I was the son of an itinerant Baptist minister-we moved about once a year, as I remember it-and had picked up a scrambled education in many small towns in Pennsylvania, Ohio, and Iowa. It happened that I graduated from high school in Jamestown, North Dakota, and one of my classmates, Garth Howland, urged me to continue my education at a university. The university he had in mind was the nearest-the U.N.D. at Grand Forks. Since I knew nothing about universities and had no plans for the future, I went along. My finances were non-existent. I planned to work my way through.

As for my preparation, I had been an indifferent student. The only thing I had a smattering of was English literature. Before I finished the eight grade I had discovered and read most of the well-known novelists, Dickens, Stevenson, Scott, Duman, Cooper, and a vast sampling of others. In high school I discovered poetry-first Keats, then Shelley and Shakespeare-these in drugstore shelves and in libraries-and then all the major names, from Tennyson, Browning and Swinburne on into the past. This caused a major revolution in my life and thinking. Reading poetry was an overwhelming experience. With me it became a consuming vice. And having got so deep in, I took another step-I began to write poetry. This, however, I did in secret. In the Middle West in the years where I attended high school, the arts were not encouraged. The people around me were immersed in three activities-farming, banking, and trade. Religion and religious thought were accepted as minor necessities by the minister. If you wrote music or poetry you hid it. You didn’t want to be jeered at by the other boys in school.

But this changed suddenly and dramatically when I arrived at the university. For the first time in my life I found myself among people who thought the life of the mind was more important than banking, and who respected any attempt to conquer an art form. Professor Gottfried Hult, who taught me Greek, also wrote poetry, and sometimes sold it. Professor Vernon Squires, who was Dean of the English Department, made me proud that I was able to quote and tried to write in verse. I found there was a place in society even for an odd duck like me! This is perhaps the most important cultural influence a university can have. In a world given over so largely to getting, using, and keeping property, it maintains a retreat for those who are more interested in the creation of beauty or the discovery of truth than in making a profit. Mind you, I am not opposed to the making of profits. If nobody saved, if nobody bargained, if nobody made profits, there would be no time and no money for the creation of beauty or the discovery of truth. But a balance must be maintained between the crafts and the arts, and the university does its best to maintain it. Anyway, the U.N.D. did it for me. If I hadn’t gone to the university I might have been an unhappy and mediocre banker, farmer, or store-keeper. I’d have gone no further.

By my own standards I have no gone very far or achieved very much, but as a farmer or banker I’d have been a most unhappy man-and so I write this note of grateful appreciation to my alma mater, thanking it for being there when I needed it so badly, and for supplying hope to the current crop of youngsters as they come to it from the windy plains.

I have been looking through an old copy of DACOTAH, which I edited in 1911, and have been studying the young, keen, beautiful faces of the girls and young men who were my classmates and friends fifty years ago. There are so many of them I can’t mention them all, and they are so scattered by time and distance that I’m not sure what few of them are still alive, but to those who recall the years 1908 to 1911, I’d like to send greetings and affections. I wish I could be with you. Since I can’t be, I’ll remember you as you were then. And, still looking at young faces in the old book, I want to thank each of you for being there then and for being the kind of person you were when the world and the university and you and I were so young.

This letter was written by Maxwell Anderson, famed playright, in October, 1958, to the University of North Dakota.