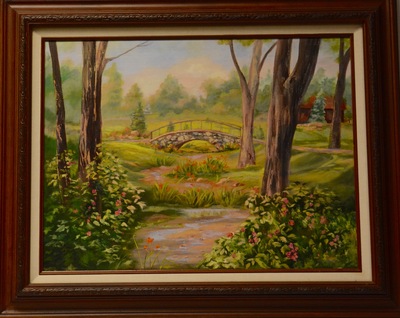 Document on back of painting:

Faced with a near terminal case of cabin fever after moving to Grand Forks, North Dakota with husband Earl and two small children, Sandy enrolled in painting classes at the Grand Forks Park Board. She became an instructor there in 1973 after her third child was born and has enjoyed the combination of hobby and occupation until retirement in 2003.

Her favorite subjects are water, moutnains, flowers, rural North Dakota, and the desert. She grew up with the ocean and gardens of Long Island. New York, and lived in the mountains of Utah and Colorado. She now divides her time between North Dakota and Arizona with ehr husband, Earl.

Sandy also enjoys sketching and taught an outdoor sketch class every summer until 1995. Her paintings have appeared in numerous solo and group exhibitions as well as public and private collections in North Dakota. She is represented by the Heritage Art Gallery in North Dakota.

_Graduated from Pacific Luteran University with a BA in Education and a Minor in Art.

-UND is special to the Earl Mason Family. Four generations have graduated from UND. Earl's Father, Sewell Mason, taught Mathematics from the 1930s to 1950s. Earl taught Civil Engineering for 34 years. The three Mason children all graduated from UND>