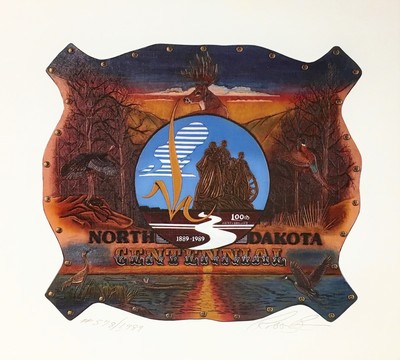 Barr was a legendary leather artist known the world round for his three-dimensionally embossed leatherwork. Barr and George Hurst partnered to film several leather instructional videos in the late 90s that captured some of Barr's artistry as he demonstrated the techniques to create the style of leather art that he was famous for – often depicting wildlife and portraits of Native American elders.

“Robert "Robb" was born Sept. 7, 1950, in Warren, Minn., to Joyce and Robert H. Barr. In 1965, the family moved to Bismarck. Robb graduated from Bismarck High School in 1969, and then moved to Denver to attend broadcasting school. He began learning leather carving while living in Colorado and later returned to Bismarck to pursue this art as a career. Eventually, Robb developed his own pattern books and a unique three-dimensional carving technique. Over the years he won many awards, the most prestigious being the Al Stohlman award, which is the highest achievements awarded in leathercrafting. In addition, he taught his skills to students in the United States, Australia, Europe, and Asia. He was on a teaching tour at the time of his death. Much of Robb's artwork will be permanently on display at the King Museum in Sheridan, Wyo., as part of its Al Stohlman display.”

Prints representing original works which were made of leather, to commemorate the North Dakota Centennial.