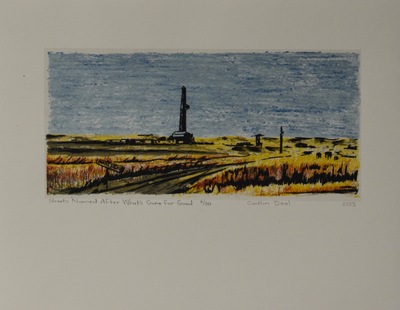 A road surrounded by yellow fields. In the distance is an oil well.

I don't have many personal experiences that connect me to the oil boom in Western North Dakota, but I try to be aware of the changes it is making to the environment. My influence for this print was based off of a song written by the Montana native musical group, Storyhill, entitled "Paradise Lost". The chorus lyrics read:

When we were young we used to walk out in those fields, and run forever in the backyard woods. Now the old trails disappear in neighborhoods, with streets named after what's gone for good. - Storyhill

The two separate layers of the image represent two different times, then and now. The prairie orchid is now an endangered species due primarily to the oil boom. The street sign, Prairie Orchid, leads back to the song lyrics, "streets named after what's gone for good" which became the title of my piece.