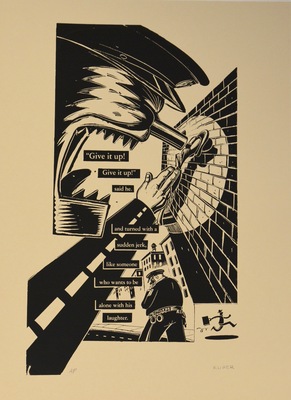 The suite of screenprints on display is based on Kuper’s 1995 graphic novel of the same name—which in turn appropriates a short (126-word) literary work by Kafka.

Peter Kuper is an American comic artist and an illustrator. He is best known for World War 3 Illustrated, a political comic magazine. His work regularly appears in numerous newspapers and magazines including The New Yorker, The Nation, and Mad. Kuper’s artistic work combines an alternative style of comics and illustrations, and often lacks the use of words. Peter Kuper was a visiting artist for UND in 2011.