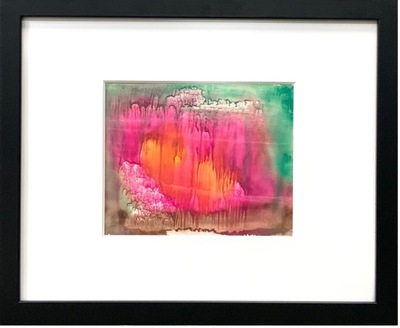 George Starcher was the ninth president of the University of North Dakota from 1954 to 1971. He was well regarded by those around him and by the University due to his ability to accommodate the campus during this time of growth when enrollment had tripled. It can be argued that UND didn’t suffer the same social unrest as other universities due to Starcher’s defense of free speech, including the right to peacefully assemble. A brilliant mathematician, Starcher became a more active artist in his later years following retirement, most notably creating watercolors of landscapes and campus buildings.

The nonrepresentational monoprints created by Starcher create an almost kaleidoscopic image, not providing an explicit meaning. With the lack of recognizable shapes and figures, one can often be confused as they first contemplate the piece. His work challenges the viewer to interpret each piece through their observations, where their imagination can bring them to their own conclusions.