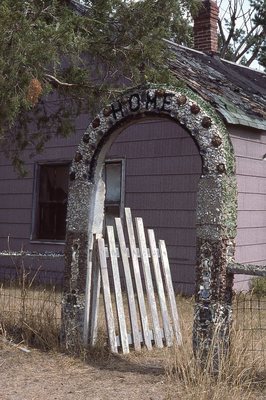 Paul & his wife Mathilda originally emigrated to LaCrosse, Wisconsin from Germany in 1885. They raised five children on their farm and later left the farm's operations to one of their sons. In 1929, the couple decided to begin their own "retirement project". Building continued from 1929-1936, primarily in the summer months. Sculptures on the property included ships, fences, religious structures, and many other buildings. Many of the pieces on the property made of concrete and are covered in shattered glass and crockery. The Wegner Grotto is now owned by the Kohler Foundation which has preserved the pieces and added structural stabilization to the area.

The "Home" arch sculpture depicted in the photograph leads to the house on the farm property. This structure is covered in mostly crockery which is old, broken dishes. Connected to the arch is more fencing which is also decorated. This is just one of the many places where the couple's fencing can be seen.