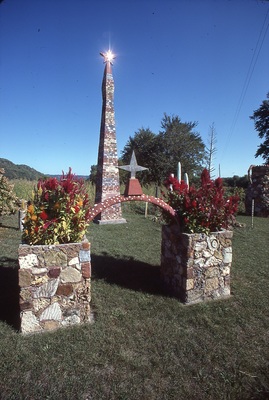 Herman Rusch (1885-1985) retired and bought the Prairie Moon Dance Pavilion in 1952. He used this building and filled the space with natural phenomena, curios, unusual machines, and personal mementos. He constructed his first stone planter in 1958, this sparked his interest in creating and obtaining stone sculptures and planters. Rusch built an arched fence that spanned 260 feet and introduced color to his work. From here, he began to add color to freshly mixed concrete and add bits of seashells and broken bottles to his sculptures.

In addition to creating his own sculptures, Rusch also purchased artwork from other artists and by 1959, he had acquired almost 40 pieces. At the age of 94, Rusch sold the Prairie Moon at an auction and almost all the artwork from the pavilion was dispersed. He died eleven days after his 100thbirthday leaving behind a self-portrait painted on concrete watching over the pavilion and his art. In 1992, the Kohler Foundation purchased and restored the Prairie Moon Dance Pavilion to recognize self-taught artists.

This sculpture stands 13 ½ feet tall and made of rocks pieced together from nearby bluffs. This piece was Rusch’s last and most impressive and captured the attention of the art world.