Loranzo Dow Pugh: Rock Carving of The Bust of a Man 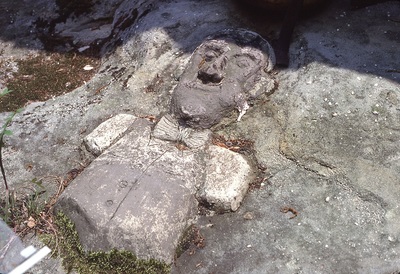 Loranzo Dow Pugh, 1906-1993, was born in Putnam County, Tennessee. Approximately 24 years later he moved to Battle Creek, Michigan where he worked as a machinist. By 1935, Pugh returned to Monterey, Tennessee, where he would spend the rest of his life. During this time he created artwork, some of which was created with just natural materials found in his backyard. He became known for his woodcarvings, but also carved art out of stone. His artwork can be described as “folk art,” which is rooted in traditions for culture and community and expresses cultural identity. As a woodcarver, he would create furniture with interesting designs that others would eventually buy in auctions.

This stone carving depicts the upper half of a man wearing fancy clothes. The carving has experienced weathering from exposure to the elements since it was originally created.