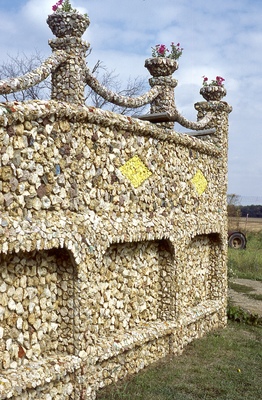 William Notzke (1902-1991), ran Jubilee Dairy out of Peoria County in Illinois. He was selling ice cream when he had the vision of creating an on-site rock garden. He created his sculptures out of quartz, which he hauled out of Colorado and Arkansas himself. It took him two decades to build a five-level rock garden, sculpted out of rose and crystal quartz. At the top of this garden, overlooking it all, stands a memorial arch built for his wife Ethel, who died in 1963. Ethel did not approve of William’s handiwork, but he devoted the sculpture to her anyway.

When Notzke died at the age of 89, his garden was sold by his daughter. Cheryl and John Becker bought the site and have been the caretakers ever since. This can be seen on Route 150, but cannot be accessed directly through the driveway in order to preserve the property as best they can.

This closeup image highlights Notzke’s intricate work with quartz stone, creating the walls and roping that surround the levels of the garden. It also shows his use of colored stone placed within the walls.