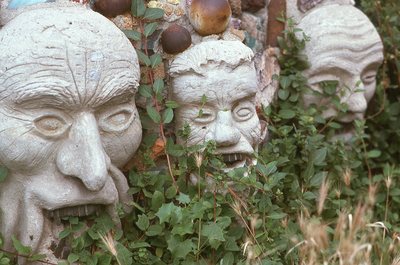 Calvin, 1903-1972, and Ruby Black, 1915-1980, moved from Redding, California, to Yermo, located directly south of Death Valley in the heart of the Mojave Desert, in 1953. They opened a small rock shop and refreshment stand along the highway and began constructing outbuildings, large whirligigs, tableaux, and other amusements to attract customers. They called this spot "Possum Trot," after a building type from their native south, and populated it indoors and out with home-made, life-sized dolls. Calvin carved and painted over 80 dolls, some based on real people, and gave each a name, which was painted on a wooden tag. Ruby used discarded clothing to dress the dolls. The Possum Trot was registered to the National Register of Historic Places in 1980. After Calvin and Ruby died, despite what the Blacks wanted, the dolls were split up and sold to buyers. Currently, some travel to different museums and some continue to be traded amongst collectors.

This image features three concrete exotic male heads attached to a stone wall near the ground on the property.