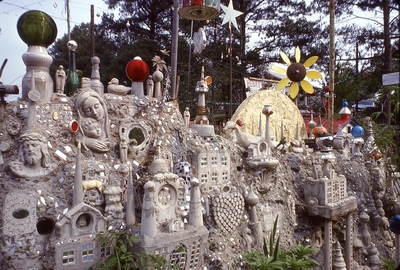 Howard Finster (1916-2001) was one of thirteen children and was born in Alabama in the year 1916. When he was 6 years old he started school, but only went through the 6th grade. At the young age of 16 he started preaching for a Baptist church in Georgia. He would see visions that he believed were from God; these visions inspired him to spread the gospel through art. His artwork often reflected inspiration from Bible verses that inspired him. His artist-created environment became known as Paradise Garden, which holds over 47,000 pieces of art and took over thirty-five years to complete. The pieces of artwork are made out of materials he obtained from his bicycle and television businesses, as well as other trades that he did. The Garden was registered under the National registry for historic art in 2012. The Garden has undergone restorations as time and the elements cause the art to wear. However, Paradise Garden is still a beautiful place where people can go to see the incredible site created by Reverend Finster.

This image was captured in Paradise Garden ca. 1976. Within this piece Mary and baby Jesus’s heads are shown, as well as the head of Jesus as an adult. Additionally, a city with buildings made of cement throughout is featured.