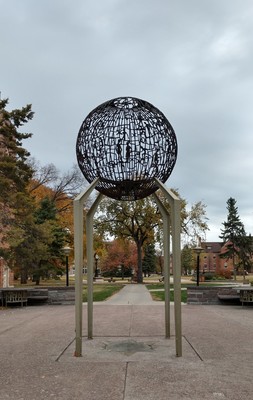 Stanley O. Johnson was born in Crookston, MN and earned his undergraduate degree in 1953. While working on his Masters degree in the UND Art Department he became a full-time instructor. Before finishing his MS degree in 1955 he also studied sculpture at the well-known Bauhaus Design school (Illinois Institute of Technology). He later became a Professor in the UND Art Department in 1957, served as Department Acting Chairman from 1962-63 and Chairman 1971-74, and helped design the new fine arts building before his resignation.

The plaza between Merrifield and Twamley Halls marks the site of Old Main, the University's first building. The Main Building opened in 1884 and was demolished in 1962. Construction methods of the time were not able to support a building of that size, and the building quickly became unstable.

The centerpiece of the site is the Old Main Memorial Sphere, created by the late Stanley Johnson, longtime UND art professor. The steel-and-bronze sphere, 7 feet in diameter and 16 feet high, is laced with 29 figures representing educational development. An eternal flame burns in the center of the sphere.

Engraved on a bronze plaque (more details below) at the base are the names of the eight UND presidents who served in Old Main, a depiction of the building, and four lines of UND's anthem, "Alma Mater:· The sphere was dedicated in 1963.

There is an engraved bronze star/sun-shaped plaque underneath the sphere. All 8 sections of this plaque include a name of one of the UND presidents that served in Old Main:

(counter-clockwise from bottom section of sun)

An engraving of the Old Main building is in the center of the sun plaque with the following inscription:

THE FIRST BUILDING AT THE UNIVERSITY OF NORTH DAKOTA

ERECTED IN 1883 IT SERVED THE STATE

AND GENERATIONS OF STUDENTS FOR EIGHTY YEARS

Home Of Lofty Thought And Learning,

Torch Is Passed From Hand To Hand