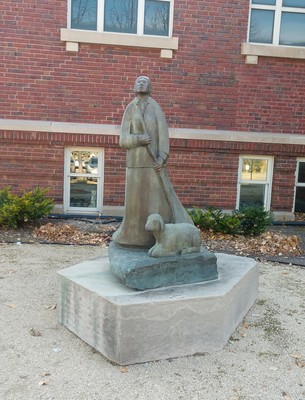 Displayed: In front of North Dakota Museum of Art

Alan Houser was a Chiricahua Apache sculptor and artist. He was the first member of his family of the Warm Springs Chiricahua Apache to be born outside of captivity since the tribe's 1886 imprisonment by the US government and his father served as translator to the spiritual leader Geronimo. He studied at Dorothy Dunn's art studio at the Santa Fe Indian School and went on to teach at the Intermountain Indian School in Brigham City, Utah and the Institute of American Indian Arts. He's received several major public commissions and Guggenheim Fellowship for sculpture and painting in 1949. His works have been displayed at the National Portrait Gallery, the Smithsonian Institute, and the Oklahoma State Capitol Building. In 1991 he became the first Native American recipient of the National Medal of Arts. In 1993, Houser was dedicated the Allan Houser Art Park by the Institute of American Arts. His works have continued to be displayed and exhibited even after his death in 1994.

A young Navajo woman looking upwards and holding a long staff. There is a lamb at her feet.