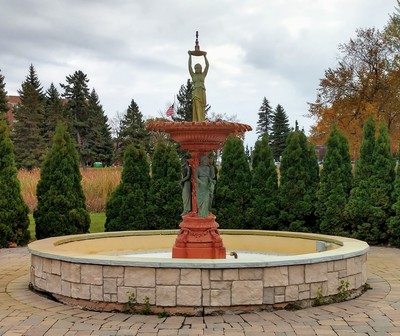 Donated by the Adelphi Literary Society in 1905

Displayed: Near the English Coulee, in front of the Hopper-Danley Spiritual Center

Donated by the Adelphi Literary Society in 1905, built 1907. The fountain has had several location across campus and has remained on the west bank of the English Coulee since 1928. Originally built in the center of campus, near Old Main, it was moved near the Burtness Theatre in 1911, where it remained for 17 years.

The fountain has undergone several repairs over the years and was restored in 2007 after the donation of ten million dollars from the estate of Roy and Elnora Danley in 2006.

The fountain depicts Pythia, the mythical priestess who served at the Temple of Apollo, also know as the Oracle of Delphi, holding a plate from which inspiration flows in the form of water. On the base of the fountain, the three muses are depicted, one carrying a sheaf of wheat, one with a lyre, and one with a scroll.