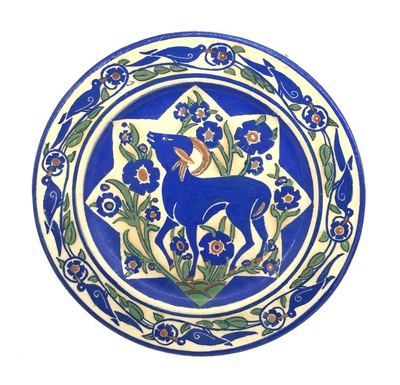 Persian art, or Iranian art, has served as an influence for many in the West. The use of goats in Persian pottery dates back as far as 4th millennium BC. With diverse beliefs held by various cultural groups, such as the ability for its horns to bring rain, the mountain goat has historically been adored and worshipped, resulting in its frequent presence in art and architecture.

Margaret Kelly Cable was recruited in 1910 by UND Chemistry Professor and State Geologist, Earle Jay Babcock, to establish a Ceramics Department at the School of Mines. Her goal was to prove the viability of North Dakota’s native clays, which in turn could provide economic and commercial development opportunity in the region. She went on to teach for the next 39 years, building an unprecedented legacy through her research, pottery making, and mentorship. Cable sought inspiration regionally and globally, as seen in the Persian-style motif of the ceramic compote.

Crack on bottom side of rim, however it does not change the sound of piece