Julia Edna Mattson was born in Kensington, Minnesota on October 28th, 1893. After moving to North Dakota in the early 1910s, Mattson attended University High School in Grand Forks, graduating in 1920. She enrolled at the University of North Dakota in 1920 and started working as a part-time student assistant in the Ceramics department. She graduated from UND in 1924 with a BA in Art and Education and immediately got a job as an instructor at UND. Mattson was responsible for “kiln-stacking”. She would carefully load all the kilns with pieces that needed firing and remove them when done. Mattson would also make new molds, pottery for sale and exhibition, convention favors, and special orders. In an astounding feat of work, ethic, and talent, it has been calculated that Mattson made over 4,400 models from 1927-1938. She produced pieces including medallions, souvenir items, and special commissions. She also began to develop a distinct style in the 1930s, implementing many western motifs: depicting coyote, bison, wheat, covered wagon, oxcart, and Native American travois (frame structure used for transportation consisting of two joined poles and pulled by a horse or dog). Mattson even taught her own specialty class focused on “building” despite its less professional reputation at which Cable “scoffed at...as a way of making pottery”.  In 1933, three of her mosaic plaques were showcased at the Chicago World’s Fair. In the late 1930s, Mattson returned to school yet again, studying drawing and painting, this time in Taos, New Mexico. She likely interacted with many famous artists of the time who frequently gathered in Taos in the 1930s, such as Georgia O’Keefe and Ansel Adams.  In 1950, Mattson was promoted from instructor to Assistant Professor at UND. The 1950s were also an exciting decade for Mattson due to her earning an MA from UND in 1951 for Educational Psychology and Ceramics. In response to the changing times, she began implementing post-war influence, modernistic trends, abstract decoration, colorful patterns, and asymmetry of form in her work.  In 1957 she was honored by the American Artists Professional League and in 1963, her final year at UND, a vase of hers was selected to be presented to John F. Kennedy to commemorate his visit to North Dakota. When Mattson retired in 1963, the famous cobalt blue seal, that had been in use since the early years of the Ceramics department, was retired. Mattson’s retirement marked the end of the Babcock-Cable-Mattson era of the UND Ceramics department. Her most well-known pieces are applauded for their designs, such as the Cowboy “Why Not, Minot?” vases and her many works depicting Native American imagery.  Mattson moved to California after her retirement and died on December 16th, 1967 in Los Angeles. 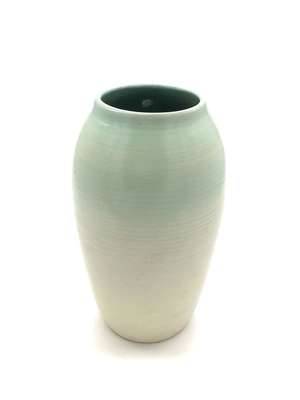 Other Seals and Stamps