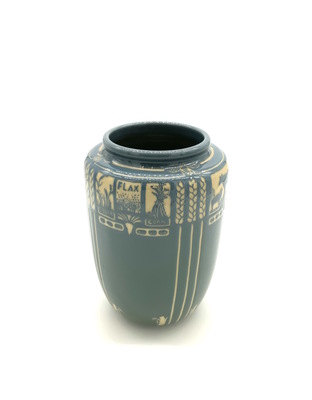 Donated by Helen Rice Sorlie in 1998

Blue Sgrafitto images of Dakota Maidflower turkey images, flax, clover, corn, wheat, cows, sheep, hogs. The crown-jewel of the of the Cable era, it was commissioned by then Governor Sorlie in 1926.

"In 1929, Governor Arthur Sorlie commissioned Margaret Cable to make a unique artwork promoting the state's agriculture and industry. Her North Dakota Products Vase references nineteen state-based products and state symbols, including crops like wheat and flax, several varieties of livestock and the state flower, the prairie rose. An elegant symbol of North Dakota's progress in the early twentieth century, the vase was exhibited around the state to wide acclaim."