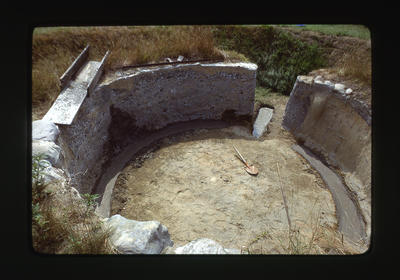 James Smith Pierce purchased a 17-acre plot of land east of the the Kennebec River in Clinton, Maine. He spent the next 15 years crafting 20 distinct pieces of land art on what was called Pratt Farm, or, as Pierce called it, a “garden of history.” His work on Pratt Farm spanned millennia by blending earthworks with local and foreign history.

This photo pictures the early stages of Kiva, the first piece that Pierce began working on in the summer of 1970. Kiva was inspired by a Native American form of housing construction.