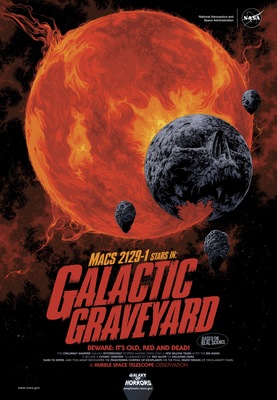 Image text:
National Aeronautics and Space Administration
NASA
MACS 2129-1 stars in: Galactic Graveyard
Beware: It's old, red and dead!
Based on real science
This chillingly haunted galaxy mysteriously stopped making stars only a few billion years after the Big Bang! It became a cosmic cemetery, illuminated by the red glow of decaying stars. Dare to enter, and you might encounter the frightening corpses of exoplanets or the final death throes of once-mighty stars.
A Hubble Space Telescope observation
www.nasa.gov
Galaxy of Horrors
exoplanets.nasa.gov