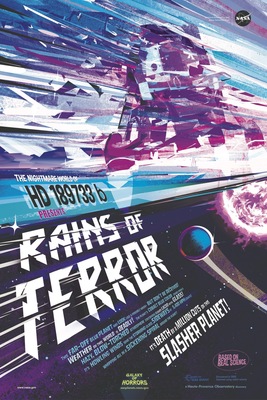 Image text:
National Aeronautics and Space Administration
NASA
The nightmare world of HD 189733b Presents: Rains of Terror
This far-off blue planet may look like a friendly haven- but don't be deceived! Weather on this world is deadly! The planet's cobalt blue color comes from a hazy, blow-torched atmosphere containing clouds laced with glass! Its howling winds send the storming glass sideways at 5,400 mph (2 km/s) whipping all in a sickening spiral around the planet!
It's death by a million cuts on this slasher planet!
www.nasa.gov
Galaxy of Horrors
exoplanets.nasa.gov
Based on Real Science
Planet type: Gas giant
Discovered in 2005
Detected using radial velocity
A Haute-Provence Observatory discovery