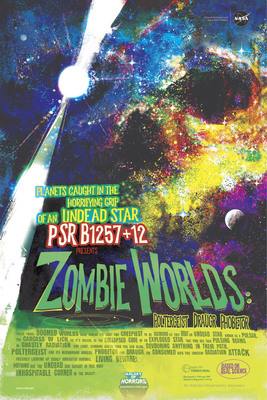 Image text:
National Aeronautics and Space Administration
NASA
Planets caught in the horrifying grip of an undead star
PSR B1257+12 presents Zombie Worlds: Poltergeist Draugr Phobetor
These three doomed worlds were among the first and creepiest to be discovered as they orbit an undead star known as a pulsar. The carcass of Lich, as it's called, is the collapsed core of an exploded star that now has twin pulsing beams of ghastly radiation and light, spinning faster than you can blink, devouring anything in their path. Poltergeist and its neighboring worlds, Phobetor and Draugr, are consumed with this constant radiation attack possibly lighting up sickly irradiated auroras. Living beware! Nothing but the undead can subsist in this most inhospitable corner of the galaxy!
www.nasa.gov
Galaxy of Horrors
exoplanets.nasa.gov
Planet type Terrestrial
Discovered in 1992 and 1994
Detected using pulsar timing
Based on real science
An Arecibo Observatory discovery