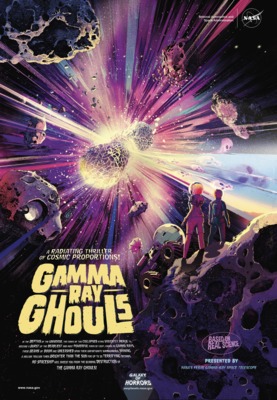 Image text:
National Aeronautics and Space Administration
NASA
A radiating thriller of cosmic proportions!
Gamma ray ghouls
In the depths of the universe, the cores of two collapsed stars violently merge to release a burst of the deadliest and most powerful form of light, known as gamma rays. These beams of doom are unleashed upon their unfortunate surroundings, shining a million trillion times brighter than the sun for up to 30 terrifying seconds. No spaceship will shield you from the blinding destruction of the gamma ray ghouls!
www.nasa.gov
Galaxy of Horrors
exoplanets.nasa.gov
Based on real science
Presented by NASA's Fermi Gamma-Ray Space Telescope