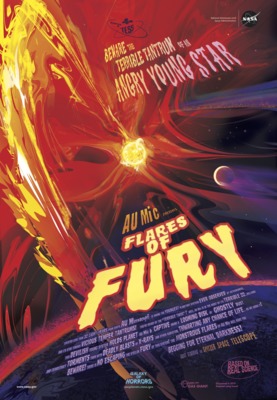 Image text:
National Aeronautics and Space Administration
NASA
Discovered by TESS
Beware the terrible tantrum of an angry young star
AU Mic presents Flares of Fury
Located less than 32 light-years from Earth, AU Microscopii is among the youngest planetary systems ever observed by astronomers, and its star throws vicious temper tantrums! You've heard of the "terrible twos"? Well, AU Mic is in the midst of its terrible 22... millions! This devilish young system holds planet AU Mic b captive inside a looming disk of ghostly dust and ceaselessly torments them with deadly blasts of x-rays and other radiation, thwarting any chance of life... as we know it! Beware! There is no escaping the stellar fury of this system! The monstrous flares of AU Mic will have you begging for eternal darkness!
Guest starring the Spitzer Space Telescope
www.nasa.gov
Galaxy of Horrors
exoplanets.nasa.gov
Planet type: Gas giant
Based on real science
Discovered in 2019
Detected using transit