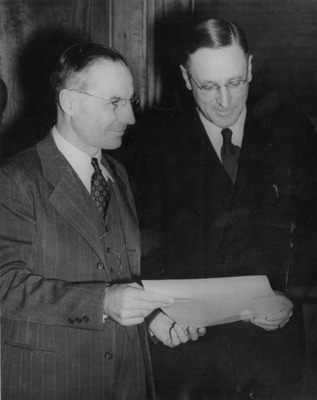 North Dakota Governor Fred Aandahl presents a Certificate of Appointment to Milton Young. Aandahl appointed Young to a seat in the United States Senate on March 12, 1945.

Fred Aandahl served as the Governor of North Dakota from 1945 to 1950, in the United States House of Representatives from 1951 until 1953, and as Assistant Secretary of the Interior during the Eisenhower administration, from 1953 to 1961. Milton Young was a United States Senator from North Dakota from 1945 until his retirement in 1981. Both were members of the Republican party.