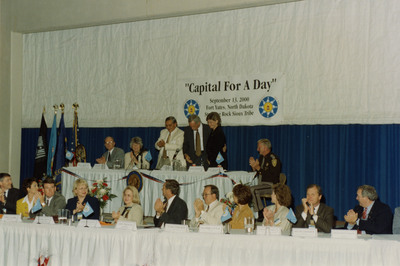 Rosemarie Myrdal and other officials applaud during Governor Ed Schafer's speech at the "Capital For A Day" at Fort Yates in 2000.

Seated at the top table, from left to right: Bill Goetz, Myrdal, an unidentified man, Governor Schafer and First Lady Nancy Schafer, and an unidentified member of the North Dakota Highway Patrol.