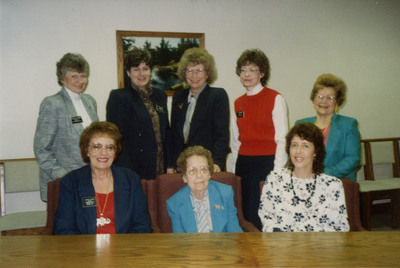 Photograph of Rosemarie Myrdal, State Representative Dagne Olsen, and six unidentified women around a conference table. Olsen is the front row on the far left, while Myrdal is the middle of the second row.

A Republican from Edinburg, Rosemarie Myrdal represented District 11 (Pembina and Walsh counties) in the North Dakota House from 1985 until 1993 and served as the Lieutenant Governor of North Dakota from 1993 until 2001.

Dagne Olsen represented District 19 (Grand Forks County) in the House. A Republican from Manvel, she was elected to the House of Representative in 1980 and served until her death in 1994.