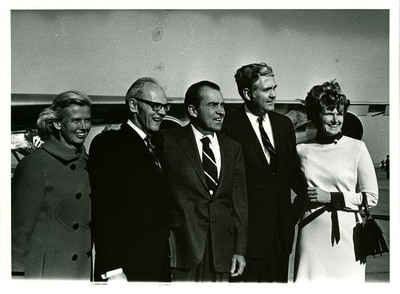 President Richard Nixon (center) appeared at the Grand Forks Airport in October 1970 to rally support for Thomas Kleppe, candidate for U.S. Senate. The President was joined by Representative Mark Andrews and his wife, Mary (right). Glendora and Thomas Kleppe are on the left.

Originally from Cass County, Mark Andrews represented North Dakota in the U.S. House of Representatives from 1963 to 1981 and in the U.S. Senate from 1981 until 1987.