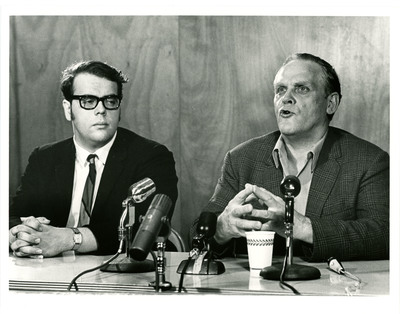 Secretary General of the Communist Party USA, Gus Hall (right), speaks at the UND Memorial Union on May 14, 1968. Hall was originally intended to speak at both the Memorial Union and the Fieldhouse, but following considerable controversy, Hall spoke only at the Union. This building was the only one on campus not built with taxpayer funds. Hall remarked to the audience that governments should not "stifle thought or expressions of that thought." (Dakota Student, 17 May 1968, page two)

The individual on the left is unidentified.