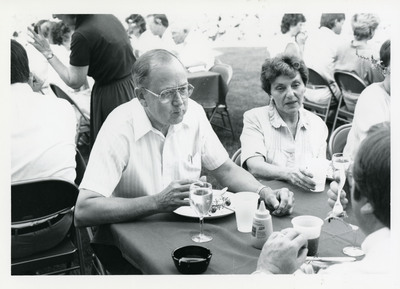 North Dakota Lieutenant Governor Lloyd Omdahl, along with his wife Ruth, enjoy a picnic held in his honor on August 4, 1987. Omdahl was named Lieutenant Governor following the death of Ruth Meiers in March 1987. Lloyd Omdahl also served as State Tax Commissioner from 1963 until 1966 and he was both an alumni and professor at UND.