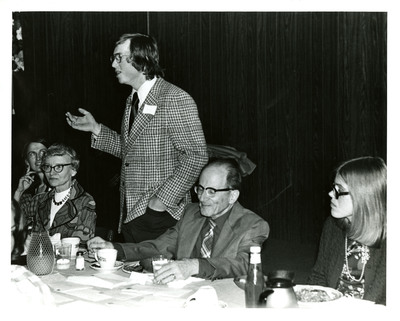 Future Congressman Earl Pomeroy (standing in center) speaks at an undated Experiment in International Living meeting. The Experiment in International Living was a student exchange program at UND from 1953 to 1975. Pomeroy took part in the program, which was run by Dr. Richard Frank (to the right of Pomeroy), a professor in the Chemistry Department. Frank's wife, Mary Margaret (French) Frank, is seated to the left of Pomeroy.

Earl Pomeroy served as North Dakota Insurance Commissioner from 1985 until 1992 and in the United States House of Representatives from 1993 to 2011.