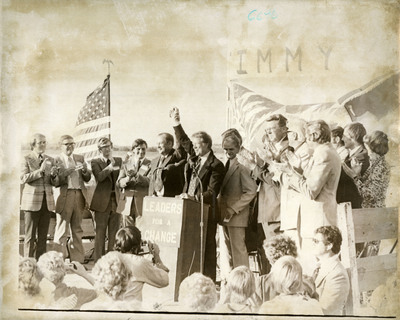 Jimmy Carter visited Bismarck during his successful 1976 presidential campaign. Joining him on the stage are Byron Dorgan (far left), Kent Conrad (beside Dorgan and in front of the American flag) and Governor Art Link (right behind Carter).

A native of Bismarck, Kent Conrad succeeded Byron Dorgan as Tax Commissioner in 1981 and served in the United States Senate from 1987 until his retirement in 2013.