Republican Leaders in the House and Senate 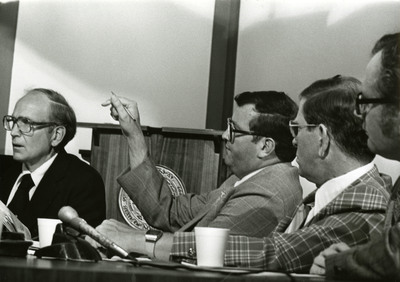 Earl Strinden (far left) and Dave Nething (middle), the majority leaders in the North Dakota House and Senate, attend an unidentified event. Nething is gesturing with his hand; the other two individuals at the table are unidentified.

Dave Nething represented Jamestown in the North Dakota Senate from 1967 until his retirement in 2012. He was an alum of the UND School of Law and served during the Korean War.