Ronald and Nancy Reagan at the State Republican Convention, 1976 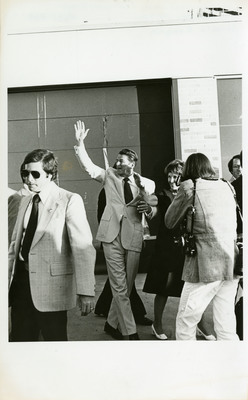 In the midst of a campaign to win the 1976 Republican nomination for President, former California governor Ronald Reagan attended the North Dakota Republican convention in Fargo. In this photograph, Reagan and his wife, Nancy, wave goodbye. Although he was unsuccessful in 1976, Reagan won the 1980 election and served as US President from 1981 to 1989.