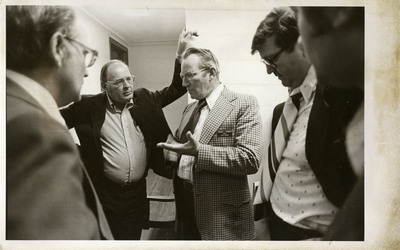 State Senator Theron Strinden gestures with his hands while others, including State Representative Richard Backes (second from left) listen. The individual on the extreme left may be Earl Strinden, brother to Theron and State Representative from Grand Forks. All others in the photograph are unidentified.

Theron Strinden represented Litchville for several terms in the North Dakota State Senate: from 1963 to 1966 and from 1969 until 1980.