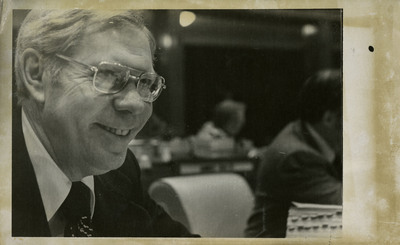 State Senator Clayton Lodoen smiles while sitting at his desk in the North Dakota Legislature in Bismarck during the 1977 legislative session. In addition to being the mayor of West Fargo from 1966 to 1986, Lodoen served in the legislature from 1973 until 1989.