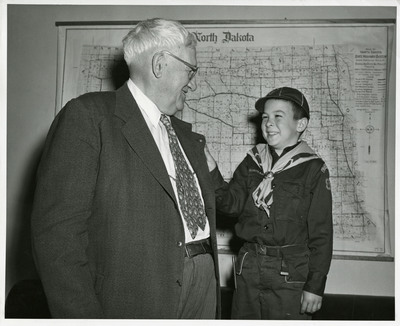 "Cub Scout John Paulsen, 8 years old, pins a badge on Congressman Usher L. Burdick designating him an honorary member of the Boy Scouts of America. John's dad is Lynn Paulsen, formerly of Concrete, N. Dak., and now with the Federal Trade Commission in Washington, D.C. The occasion was the commemoration of the 44th anniversary of the Boy Scout movement, which has now grown to more than 3 million scouts and adult leaders." (from back of photograph)