Congressman William Lemke and Others 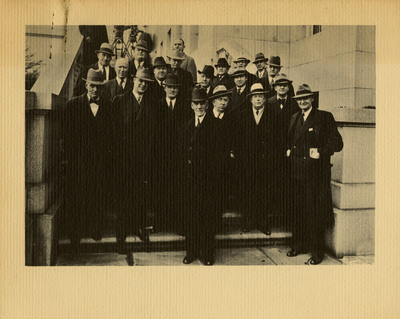 A large group of men pose for a picture on the steps of an unidentified building. Representative William Lemke, one of the few men not wearing a hat, stands on the left in the third row. Lemke served several terms in the U.S. House of Representatives: the first from 1933 to 1941 and the second from 1943 until his death in 1950. He was an important figure in the rise of the Nonpartisan League in North Dakota and was the Union Party Candidate for President in 1936.