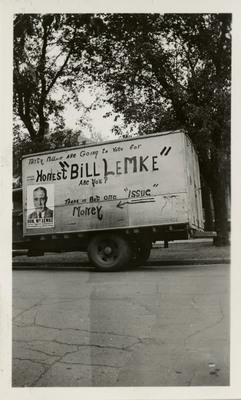 A driver side view of an unidentified truck advertising for the Union Party in 1936. The sign reads: "Thirty Million Are Going to Vote for Honest Bill Lemke Are You? There is but One Issue Money" William Lemke served several terns in the U.S. House of Representatives: the first from 1933 to 1941 and the second from 1943 until his death in 1950. He was an important figure in the rise of the Nonpartisan League in North Dakota and was the Union Party Candidate for President in 1936.