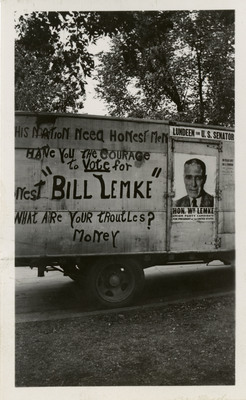 A passenger side view of an unidentified truck advertising for the Union Party in 1936. The sign reads: "This Nation Need Honest Men Have You the Courage to Vote for Honest Bill Lemke? What Are Your Troubles? Money Lundeen for U.S. Senate"

The "Lundeen" is likely Ernest Lundeen, a Minnesota politician. He represented the state in both the U.S. House of Representatives and the U.S. Senate, until his death in a plane crash in 1940.