Union Party After the 1936 Election 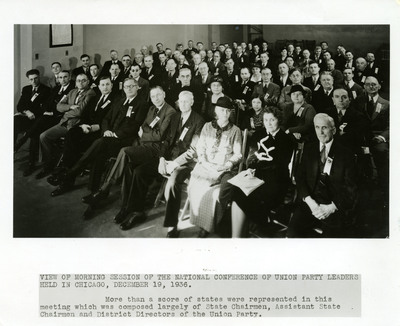 "View of Morning Session of the National Conference of Union Party Leaders Held in Chicago, December 19, 1936. More than a score of states were represented in this meeting which was composed largely of State Chairmen, Assistant State Chairmen and District Directors of the Union Party." (from bottom of photograph)

The Union Party received almost 2% of the popular vote in the 1936 presidential election, with North Dakota Congressman William Lemke as their candidate. The Union Party disbanded shortly after this meeting.