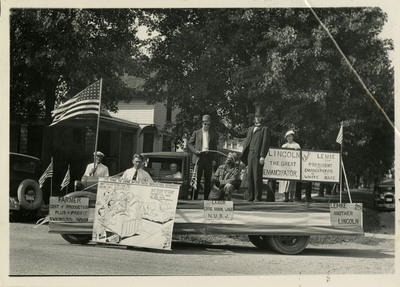 A Lemke for President float from an unidentified parade in 1936. North Dakota Congressman William Lemke campaigned for President with the Union Party in 1936. Signs on the parade read: "Farmer Cost of Production Plus a Profit Farmers Union;" "Labor Living Annual Wage N.U.S.J.;" "Lincoln the Great Emancipator;" "Elect Lemke for President the Emancipator of the White Race;" and "Vote for Lemke Another Lincoln." A political cartoon entitled "Its Time to Look After These Neglected Patients" is also present. The cartoon hearkens back to the famous cartoons drawn by J.M. Baer in the early years of the Nonpartisan League.